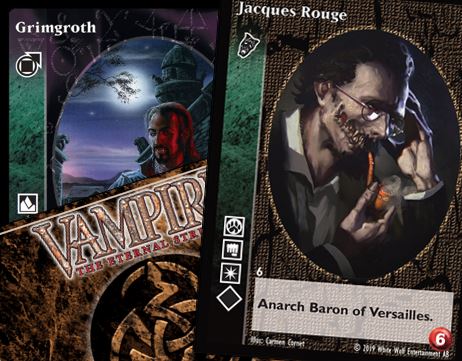 In these days of vampire scarcity (bad pun intended), we’re happy to get new ones as promos or in decks that were not built around their clans.

We just got a few new ones, so let’s have a look (and a reveal preview too, because we love you like that and we have some inside Information at Black Chantry…).

First we have the new promo card that you’ll get at the Paris European Championship (you know you’ll come!).

Jacques Rouge is a 6-Cap Nosferatu, and is Baron of Versailles (the palace near Paris that became Louis XIV’s residency).

First, a 6-Cap with 2 votes isn’t too shabby. he won’t be able to play Camarilla votes, so his playability will depend a lot on the friends he gets. As of now, in G5-G6 (well, G5…) we have a Primogen, a Prince and a Justicar. Also, until now you wouldn’t have included a Baron in a mostly Camarilla vote deck, especially not in Nosferatu, because you relied on Parity Shift for both survival and kill. Now, with the errata, it might be way harder, so assuming you still want to play Nosfie votes you might just include a cheap Baron.

His disciplines aren’t combat-oriented, to say the least. Inferior Ani and Pot won’t frighten anyone… Except of course if you play Anarch combat cards! So that gives us two different angles:

So, it’s hard to predict anything about the future playability of that vampire at this stage, but he sure gives some value for his cost.

This american Baron was pre-released as a promo for the NAC at the Origins convention, and will be made globally available later this year.

A pretty straightforward Anarch Gangrel (and we can expect lots more of them if VTES follows the V5 of the RPG). He would be quite a good vamp without his title, so as he stands he’s a pretty good deal, like his Nosfie friend.

His Cel/For makes him an obvious user of Diversion, Ani/Cel shouts Dust Up and Hell-For-Leather, and if you give him some intercept he could benefit from Guardian Vigil. I’d say we’ll need to follow this guy (and see who he comes with). 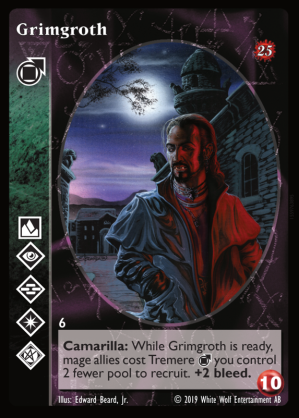 Included in the upcoming 25th anniversary box, Grimgroth is a 10-Cap G6 Tremere.

No title for this cost, ok, so what does he do?

Well, for starters he has all in-clan disciplines at superior (we wouldn’t expect less), and PRE and For as out-of-clans. PRE without any title isn’t really exciting, especially when you’d rather do some fighting and lack any real stealth discipline. For might have its uses (less so now with the errata on Ankara Citadel), once more it depends on the companions that he’ll get with similar disciplines.

Now to the exciting part: the +2 bleed. This basically makes him a non-titled, 10-Cap Inner Circle. Ok, this comparison is flawed from the start. But you get my meaning: pay one more and you gain 4 votes. Does that make this vampire bad? Certainly not, but you probably won’t include him with an upcoming Inner Circle, and if you have to choose between one and the other, well… So you need a real good incentive to pick Grimgroth. Too bad he has nothing in common with Mary Anne Blaire…

Last but not least, we have his special.

One of the decks currently dominating the scene is the Antonio D’Erlette with the Nephandus ally. That ally has always been popular due to his value for cost, but fell out of grace when the meta turned towards light cept, and it took d’Erlette to make him fashionable again.

The Tremere currently have access to 2 in-clan Mage Allies, and a few more clanless ones: 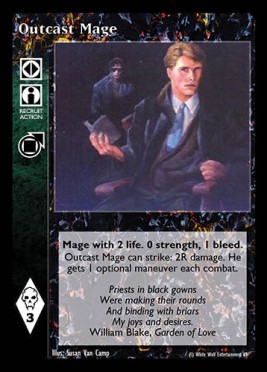 Sadly, it must be pointed out that Ponticulus is a Wraith, not a Mage!

So, to sum it up, we can now pay very bad allies a much more reasonnable cost, that might make them interesting (lots of testing will have to occur to determine that…).

Let it be noted that the first attempt at reducing their cost was Erichtho, and that no deck worth of note came out of it. But of course Grimgroth reduces them by one more pool, doesn’t have to be the one doing the recruit action, and also has that nifty +2 bleed.

So it all comes down to those questions:

I honestly prefer not to say anything radical before having seen the deck in action.

But then, it’s not all about sheer competition. This vampire opens a deck concept just by existing, and that in itself is good! We also might get some new (and better) Mages, a THA card to recruit the Magic of the Smith way, who knows? And of course we still have to see the G5 to G7 vampires he’ll be associating with.

So, all in all, a card with a potential that I hope the game will let us exploit fully in the near future.

That will be all for today dear Kindred, here’s hoping those few lines will help you wait until we get those vampires and many more!

Till then, remember: your prey is to the left, except when it’s me.

8 thoughts on “New vampires in sight!”