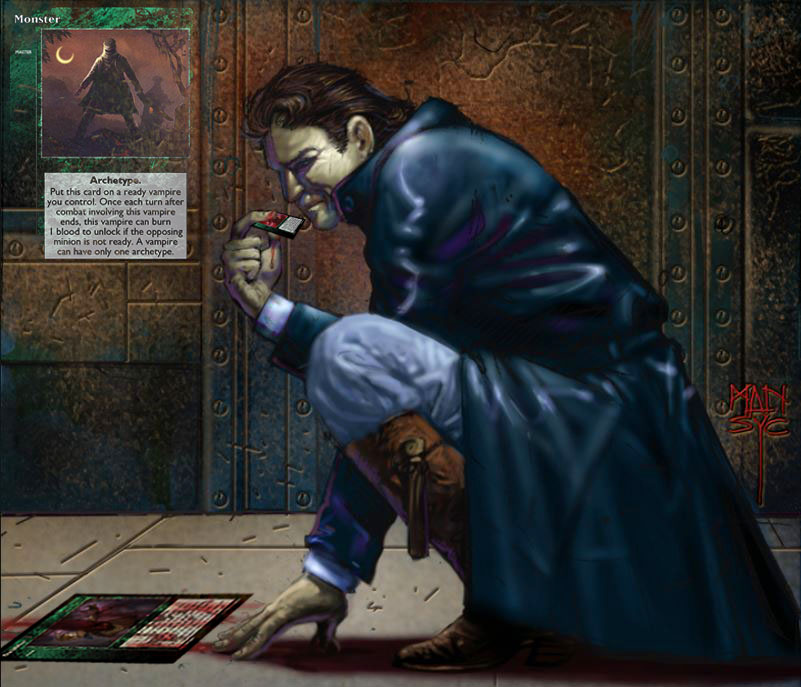 When you sit at a V:TES table, one of the most important – and also the most challenging – things is to know as fast as possible what the other players around the table are playing.

Of course, as everything in this game, it will take practice, lots of it, but hopefully this series of articles will help you gain some time.

In this first installment we’ll concentrate on generalities: what are the things we must look for to get an idea of what a deck does. Then we’ll get into the thick of the matter over, well, as many articles as needed.

Many years ago, Kamel Senni said in an interview something along the lines of “Show me a Crypt card and a Library card and I’ll know right away what the deck does”.

At the time I thought that was presomptuous, even if he had way more experience than me. But well, after a bit more practice I had to agree with his statement.

Knowing what your enemies can do, what each of the vampires can play, and what they will usually play, might be one of the harder skill sets of the game. But it’s a vital one.

Of course, there will always be surprises. Not everyone plays archetypes, and some players just like to include weird cards in their decks (some to great success, most to greater failure…). But still, you need to have the best possible idea of what the other players are playing if you want to play the best possible game.

Many beginners told me “I had no idea what that deck did, or I would have played differently”. Well, I’m going to do my best to help you in that regard, and I hope after reading (maybe quite a few times…) this series you won’t ever say that again. 🙂

Most players will play known decks.

Know the decks presented in the Choosing Decks 101 article, and you will already understand most of te basics. Some of the lists aren’t up to date, but we’ll remedy that over time…

When you see an Archetype, a crypt card and maybe a few library ones should be enough to know which one you’re facing. Just Werner usually wants to go dancing, while Enkidu prefers some other kind of tangle… An Emerald Legionnaire or a Shambling Horde in the ash heap will also be a pretty good indication of what might follow.

Of course some decks have different versions with the same crypt. For example, the Harbingers of Skulls can be played as a full Wall or a Grinder deck, and some players will go for something more funky. In any case they will contain Emerald Legionnaires, so play accordingly!

So, let’s see where and how to look…

2. Look at the Star Vampires

Some stars will of course be more obvious than others. Scarce Bloodlines are usually played for a good reason: Salubri for Spirit Marionnette and / or Renewed Vigor, True Brujah for Summon History and / or the lethal Domain of Evernight / Outside the Hourglass combo, etc.

3. Look at the disciplines

When you see a vampire you can have an idea of what he does. When you see 2 you’ll begin to see a pattern. With 3 the pattern should be obvious. Let’s imagine the following combinations:

If you see minions with Dom they will almost ALWAYS use it, because that discipline is too good to pass.

Minions with AUS might just use it for bouncing, or might be more wallish. In any case, you know there is a chance they’ll be able to block your actions, so take that into account.

More than 1 vampire with a more marginal discipline like Pro or Nec probably won’t be a coincidence. And that is even more the case with Bloodlines: you don’t play Baali of Ahrimanes “just for fun” and without the intention to use their best tools…

4. Look at the clans

Some clans are played mostly among themselves, because they need their shared disciplines or the access to their clan cards. Tzimisce will usually wall up and beat your ass, !Ventrue will grind you to death.

Some clans have several options at their disposal. Giovanni have a few archetypes based either on their disciplines or on their clan cards. You’ll need to quickly learn the difference (and we’ll help in due time).

Also, not all the decks use the 3 in-clan disciplines. Some, especially Anarch decks, might play more, while some only focus on one or two. It is rare, for example, to see either Giovanni or Lasombra use Potence. Ventrue, on the other hand, usually have at least some amount of their 3 disciplines.

5. Look at the Titles

When a player gets one voter out, he might vote. Two voters: he will vote! That is, of course, especially true if the voters are Big Caps. Maybe they will mostly bleed and play some key votes, but don’t discard your Delaying Tactis yet.

If you see Princes come out there are chances the deck will play the 2 more powerful cards they possess: 2nd Tradition and Parity Shift (maybe less after the errata, time will tell). So even if it’s not a dedicated vote deck, you know that there might be a few, and that you will have to plan for +2 Intercept.

If the voters all have PRE, you will have to plan for some vote pushing, often followed by Voter Captivation. If they all are Sabbat they might play Private Audience, and if they are all Toreador of groups 1 and 2 you can expect some Toreador Grand Ball. Yes, this interacts with all we’ve seen above, nothing is easy in this game, right? But don’t worry, it will get easier, with time and practice.

I will never forget what happened in one of my tables at the 2018 French Championship.
In hist first turn, my prey discards a Conviction. For those who don’t know it: that means he plays at least one Imbued, those pesky “crypt allies” who have their own specific rules and are known for being a major nuisance and have some good blocking capacities.
I make a remark about it, something like: “Oh, you play that, shame on you!”. But his own prey (let’s call him “N”…) didn’t take a look at the card I was talking about, nor did he seem to care. He got Marcianna Giovanni out, and put in play… The Unmasking! Needless to say, that’s the worst thing to do next to an Imbued before recruiting your own allies.

So yeah, look at what’s in the other players methuselahs, expecially in the beginning of the game of course, but also when in doubt about the precise cards he’s playing even later on.

7. What do I do with this knowledge?

Well, know your enemy and all that…

I think the most important thing is to make your hand according to what’s around you. This will be accomplished by discarding, and doing your best to cycle in order to get the cards you need.

If your predator is a bleed deck (Dominate, Presence, Dementation…) keep all your Deflection and try to get more fast!

If you see a rusher near you, get your Combat Ends (and maneuvers if he plays Potence…), your Obedience / Mental Maze, or get blockers in play (Carlton, or even Jake Washington if the rushes don’t have stealth).

Don’t discard your Delaying Tactics until you’re pretty sure neither your predator nor prey plays votes.

Get as much stealth as possible if you think your prey (or even predator if you do undirected actions) plays intercept.

To make it short: understand what is around you, and adapt to it.

The particularities of VTES, like the Discard phase and the fact that you replace the cards right away, make this sort of planning possible.

Next time we’ll get into the details, and see the decks you absolutely have to gang upon! So be ready for that (who said LoP?)!

3 thoughts on “Recognize the archetypes Part I: What to look for”